But I have sorely neglected this blog. That’s because I’ve been busy trying to finish my own nine-book fantasy series, three interconnecting series, actually: The three-book prequel series, Stormclouds, which is fairly dark and adult; the four-book Harbingers series, which tilts more YA/NA; and the two-book companion series, Betwixt & Between. More on that later.

The Shadow of Summer, the first book of Daniel Abraham’s The Long Price Quartet. I will review it as soon as I finish it, but I have to say, this writer’s fantasy world and his entire take on fantasy is unique.

The Blade Itself, Book I of Joe Abercrombie’s First Law trilogy

I enjoyed this book very much and plan to read the other two in the trilogy. The action scenes are just great, and I really liked many of the characters, especially Logen the Northman; Glotka, the horribly damaged inquisitor; and Bayaz the mage; as well as several truly kick-ass female characters. These characters suffer and bleed. They have horrifying scars and injuries. They are imperfect. They grow and change. I love that in a novel.

Some of the characters struck me as useless and annoying, though. Maybe the sequels will let me know why they are important enough to spend my time on. Jezel, the vain young noble, is especially annoying. I found myself resenting every word my brain had to process on him. Get back to Logen! Maybe Jezel was there to give us a stark contrast to Logen, but if so, I could have done with a bit less.

Also, especially in the beginning, the novel hopped from character to character. Just as we got to know one character, we suddenly found ourselves having to get to know a new one. As a writer of fantasy myself, I have had my own struggles with this problem. A big fantasy world needs a fairly vast sweep of characters. So I’ve worried about this very thing quite a bit, and I think doing something like this can be hard to pull off successfully.

For me, though, the writing is everything–in fantasy, in sci-fi, in literary fiction, in whatever I happen to be reading. I liked the writing here, but it’s a bit too comic-book for me. Too full of aarghs and ooofs and urks. (Other readers may like this aspect of Abercrombie’s writing just fine). I could have also done without every pause in the characters’ conversation getting signaled with “uh,” “erm,” and the like.

Nevertheless, I enjoyed the world that unfolds here and many of the conflicts in it. And I think this writer crafts a fantastic action scene. I am in awe of these action scenes. Because of them, and because of the wonderful characters (and in spite of the annoying ones), I know I will go on to read the rest of the trilogy.

Thanks for the great recommendation, Feenix! 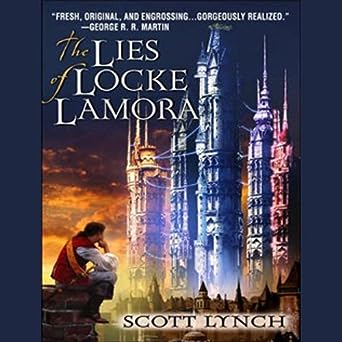 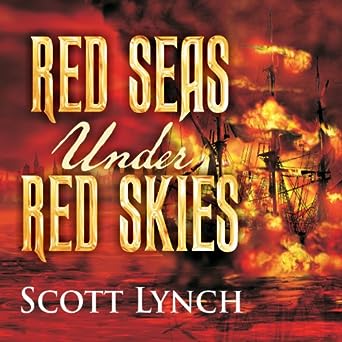 Find them on amazon.com.

The Lies of Locke Lamora is one of those fantasy books that is such fun you’ll return to it, at least in your mind, again and again. (Or if you’re like me, the person who finished The Name of the Wind and then after ending on page 700-and-something turned right back to page 1 and read it again–you might literally re-visit it.) Locke is a wonderful rogue, and his close friendship with his buddy Jean turns this novel (and the series) into one of those unforgettable Butch-and-Sundance, Odd Couple pairings (we could go on. . . Men in Black, Midnight Run, etc etc etc) that delights and thrills.

Here’s the thing about these books, including sequels Red Seas Under Red Skies and The Republic of Thieves: these two fascinating characters, and their relationship, do not remain static. They age. They learn from their mistakes. They lose trust. They regain trust. They fail. They flaunt their successes, and then they fail again. In other words, I believe these characters.

I read a blog post about one of the sequels that expressed annoyance about these books’ signal trope: Locke and Jean are incredibly clever and resourceful (and amoral–although they have their own code, which comes out in touching ways), and they have big plans for the big score to end all scores–and then everything comes crashing down. Repeatedly. The blog poster (forget who now) said, sourly, I thought, that this gets boring. Not so. It never gets old! This is why the series is such fun.

Speaking of which: the world-building is exceptionally good in these books, too. These characters inhabit a complex world made up of a variety of cultures and societies inhabited by people who don’t all look and sound and behave the same. The world is not just exotic window-dressing but materially contributes to plot and the motivations of character.

My only criticism comes in the last book, which I suppose most reviewers find the weakest. I should mention one problem that the writer had no control over: the political corruption depicted in The Republic of Thieves is tame in comparison to reality (U.S. writer/U.S. reader here). It reminds me of the previously brilliant House of Cards–but then reality overtook it. Sheer bad luck. (also horrifying, considering reality, but luckily my blog is not about that. . .)

Two things go wrong in this novel, at least in my opinion. One is the Denna Problem. I refer to the main female character/love interest in Patrick Rothfuss’s novels. A woman who is much, much more fascinating to the protagonist than she is to the reader, who might actually grow to hate her because she’s such a male-fantasy-zero of a woman. Sabetha, the woman Locke loves, is not as annoying as the woman Kvothe loves, but she comes a bit too close. Luckily she’s only a painful memory in Locke’s head until that third book, so she’s not a problem in the first two novels of the series. And anyway, I didn’t believe a word of the sex in The Wise Man’s Fear (the sequel by Patrick Rothfuss to The Name of the Wind–read them both! I’ve never before read two books that really shouldn’t work and do so brilliantly anyway. . .but I digress). Still, I think in spite of my misgivings about Sabetha, the passages about Locke’s sexual relationship with her work very well, even though we have to sit through The Dance of the Seven Veils to get there. I think writing sex scenes is really hard to do, too.

The second problem in Republic of Thieves resides in the novel’s use of a play as the main ruse in a scam that Locke, Jean, and the gang are running. They pose as actors in order to infiltrate a city’s corrupt political apparatus. That’s okay, but the novel insists on giving us a lot (too much? pretty much all?) of the dialogue of the play, and it all sounds like it was written by Shakespeare’s dim-witted not-so-talented cousin. I think a couple of lines of dialogue to suggest the general tone of the play would have been plenty.

Some readers have objected that the second book in the series, Red Seas Under Red Skies, suffers from a similar problem. They think the detailed descriptions of nautical matters are over the top in that novel. I really liked them. I’m a committed Patrick O’Brian fan, though. Rabid, even.

Four of the vampires/witches novels by Deborah Harkness

I started out by reading A Discovery of Witches, the first in this writer’s All Souls Trilogy. I liked parts of it. I very much enjoyed the ideas she developed about vampires and vampire culture. The witches aspect–not so much.

I suppose what grabbed me about these novels and led me to read more of them was the background information–all of the interesting stuff about alchemy and whatnot. This may simply be because it fits pretty closely with my own academic background and interests.

The characters and writing, though, sounded too much like a slightly-better written Twilight. Until I read (I had to! I was on a panel!) Fifty Shades of Grey, I had never read anything commercially published that was that poorly written. So I’m mentioning a very low bar here. (UPDATE: one of my blog-readers remarked that she came away from this blog post thinking I am equating Harkness’s writing with the writing in Twilight or Fifty Shades. I suppose I am, but “slightly-better”? A lot better, really. Just not all that great. Only my opinion, of course.)

Why, oh why, did I continue with this series, you ask? I ask myself that, too. Shadow of Night, Book 2 of the All Souls Trilogy, continues the saga of a witch’s forbidden love for a vampire. I suppose I read it because the background of the story is exactly in my area of academic interest. It is set in 1590s England, the England of the publication of the first three books of The Faerie Queene with the next three still to come. Of the first performances of Romeo and Juliet. An England where Sir Philip Sidney’s Arcadia has been the rage among a certain coterie of readers for over a decade; a time when Sidney lies dead but his sister the Countess of Pembroke is still writing. An England where the scandalous School of Night flourishes, including such luminaries as Sir Walter Ralegh, George Chapman (“On First Looking Into Chapman’s” etc), Christopher Marlowe–and Matthew Royden, whom Harkness fictionalizes as her main vampire character (Marlow is a demon). I had a terrible suspicion that this book would resurrect the evergreen and supremely silly conspiracy theory that Shakespeare didn’t write his own plays, but luckily it doesn’t. The novel makes him sound like a lesser light and stealer of ideas–fair enough.

The characters and writing in this novel, though? They did not grab me. Except for the vampires.

So then, why Book 3? I suppose I wanted to see where it would all go, so I suppose that’s a tribute to the strength of the overall story arc. The Book of Life, Book 3 of the trilogy, was pretty lackluster. Except for the vampires.

I did read Time’s Convert, set in the same world with the same characters, because as a U.S. reader, I wanted to see what would happen to this fictional world in an historical setting taking place during the American Revolution–and other events of the time. One of the vampires, see, was an American Revolutionary soldier back when he was human, and then things happen, and then. . . This novel was pretty bad. At the point I finished trudging through it, I decided: enough. Not gonna read any more of these. Somewhere in there (this book? book 3 of the trilogy?), you can read a whole chapter or so devoted to a July 4th party, complete with witch-conjured fireworks. Wha???  This novel did lead me to search out a nonfiction book about the horrifying yellow fever epidemics that swept 19th century America, and read that. It was pretty bad, too, but the information was very interesting.

Now this blog post has gotten very long. More later. I’ve been doing, as I say, a lot of reading!